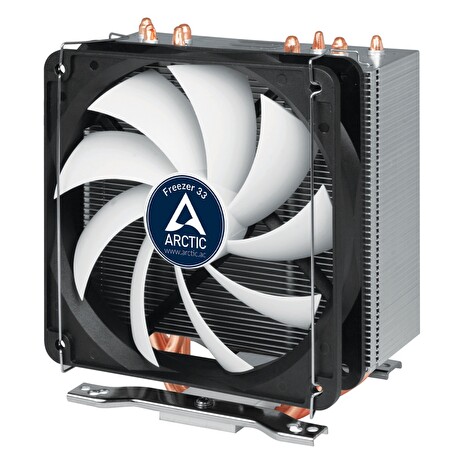 Price-Performance Champ
The Freezer 33 is based on the ARCTIC Freezer i30, but features several improvements that boost performance and further reduce noise. Thanks to the award winning cooling performance, the Freezer 33 is the perfect gadget for PC enthusiasts looking for an affordable solution for the CPU cooling.

Semi Passive Cooling
By semi passive performance the Freezer 33 provides again a special feature. A sophisticated fan controller that was developed by German engineers allows passive cooling of the CPU during simple applications such as surfing and creating documents. The F12 PWM fan only starts up at a higher load (starting at 40 % PWM). This not only saves energy but also makes the CPU cooler extra quiet.

Improved Heat Dissipation
The Freezer 33 has off-centered heat pipes that dispense the heat in a more efficient than the centered ones of its predecessors. Also, the layout of the 49 aluminium fins creates micro vortices that boost the airflow and circulate it around the heatpipes.

Optimal Compatibility
Fast and easy to install and extremely reliable, the mounting system is compatible with Intel and AMD sockets. Also, the low footprint of the Freezer 33 avoids interference with the RAM, even if there are two fans used ensuring the best compatibility.

Enhanced Bearing
Due to a new alloy/lubricant combination developed in Germany, the friction within the bearing is reduced and a greater efficiency is achieved. This way, there is less heat development as well as less bearing noise and you can enjoy a longer service life of your cooler.

Easy Installation & Transport Safe
Thanks to different mounting models for variuous sockets and a significantly lower weight compared to the i30, the Freezer 33 is not only fool-proof to install, but also absolutely transport safe.