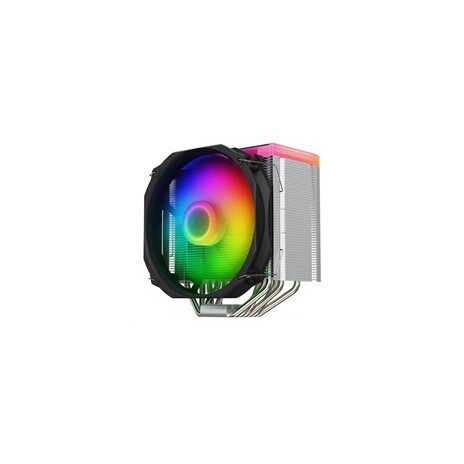 The Fortis 5 ARGB is a new SilentiumPC processor cooling system, developed in collaboration with Synergy Cooling, equipped with a two-element addressable-RGB backlight system: top of the heatsink and a fan. The distinguishing features include a completely new 140 mm Fluctus ARGB fan optimized for static pressure, high airflow, and quiet operation with an adjustable backlight, soft synchronized illumination of the asymmetrical top, and an optimized base with six heat pipes. In terms of performance, the Fortis 5 ARGB can easily compete with large twin-tower coolers, at the same time surpassing the best single-tower systems in cooling efficiency and psychoacoustic properties.

The Fortis 5 series is the next step in a revolutionary design developed in collaboration with Synergy Cooling, and another representative of the new generation of SilentiumPC cooling systems. It is equipped with a larger heatsink and a new version of the Fluctus fan. In addition to the Fortis 5 ARGB, the base Fortis 5 and Fortis 5 Dual Fan with two Fluctus fans (140 mm on the front and 120 mm on the back of the heatsink) are also being available. All Fortis 5 series coolers are covered by an extensive 6-year manufacturer’s warranty.